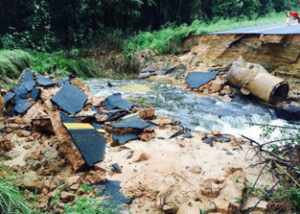 Rain. I’ve seen it before.

Half of my 50+ years living in Miami. Another ten in other parts of Florida. Native Floridians know rain.

Hurricane Andrew. Been there, done that. Hurricanes (yes, plural, like my favorite college football team) Charlie, Frances, and Jeanne. The eye of each of those three passed within a ten minute drive of our apt. at the time.

So yeah, I’ve seen rain. But not like this.

I mean, I’ve seen enough rain that even people who had never been to church started talking about Noah and the ark. But this … this was different.

TWENTY inches in three and a half days. That’s almost half of the annual average. In 1/100th of a year.

Noah? Yeah. It’s easy to joke about when everyone’s safe. But, yeah. His name came up.

I was up early Sunday morning, in the midst of these days of torrential rain. Had to cancel church due to officials asking EVERYONE to stay off the roads.

But before I knew that, I remembered a verse. Part of a verse anyway. “As it was in the days of Noah,” Jesus was telling His disciples in Matthew 24. He wasn’t talking about the rain, though. He was talking about life before the rain.

“For in the days before the flood, people were eating and drinking, marrying and giving in marriage, up to the day Noah entered the ark,” He said in verse 38.

When Jesus said, “As it was in the days of Noah,” He wasn’t referring to the rain. He was talking about how people were going about their daily lives. Eating, drinking, marrying, and giving in marriage. Just every day stuff.

Kind of how we were. Working. Eating. Drinking. Raising our kids. Band practice. Soccer games. Football games. Hunting season. Doing family stuff. And then the rains came. In Noah’s day, people were doing stuff just like that.

Then the rains came.

And even though Noah had been telling them it was going to happen, they were too busy doing everyday stuff to be ready. Too busy to be ready. Too busy to listen to God’s man tell them what they needed to do to avoid the judgment that was coming in the form of a flood. Now, I’m not trying to imply that this current flooding aftermath was judgment. In fact, God said He would never destroy the whole world by water again. But we’re not all that unlike the people in the days of Noah. Too busy to heed the men of God sent to tell us what we need to do to get ready for the next time judgment comes.

Too busy to be ready.

Only this time, what Jesus was talking about will come more swiftly than a deluge that leads to a flood. “In the twinkling of an eye,” Paul tells the Corinthians.

As it was in the days of Noah. Only quicker.